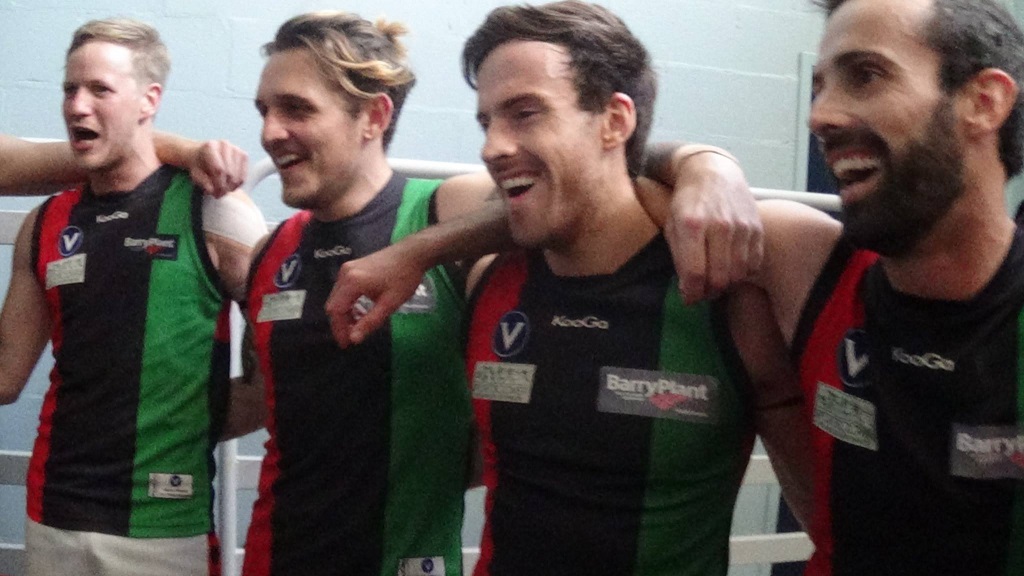 We travelled out to JT Packer Park in Carnegie to play Glen Eira who were thus far winless in season 2015. Skipper Lachy Barnes got off to the perfect start winning the toss and deciding to kick with a 2-3 goal wind to the club room end. Whether it was this advantage or the fact that we came to play for perhaps the first time for the year is unknown but at quarter time we were leading 6.10.46 to 0.2.2. With and advantage of 14 scoring shots but a lead of just over 7 goals senior coach Russell Barnes was not happy and let the players know about it. He asked for greater composure when having shots at goal for the rest of the match.

The second quarter was a much more even affair as Glen Eira managed to work into the game. Much of the quarter was spent between the arcs and the highlight of the term was undoubtedly Nick Morrison-Story’s goal where he ran from the back pocket, continually dodging opposition players and taking bounces before kicking truly from 50m out against the wind. It was truly a great goal but something we’ve come to expect from our former club captain who continues to lead the side, even without an official leadership position. At half time we led 9.13.67 to 2.3.15.

After a tight second quarter the game really started to open up after half time with the run of The Bloods really coming to the fore. Some absolutely magical foot work from Andy La Marca in his first senior game for the season ended with Ben Nucifora kicking his first goal of the game about 10 minutes into the quarter. The Bloods midfielders were well and truly on top, partly thanks to Jai Perret who was playing in the ruck, and the delivery into the forward line was long and direct allowing our key forwards the opportunity to take advantage of one on one contests. A highlight of the quarter was the dominance of Ben Nucifora and Sam Williams who was also playing his first senior game for the season in the marking contests.

Heading into the final quarter we were up by 91 points and the game was well and truly over. The side seemed to take the foot off the gas a little bit but still managed to kick 7 goals, however we also let The Saints kick 5 with the wind. For the first time for the season it wasn’t the backline making up the best with Nick Morrison-Story named BOG, Ben Nucifora also kicked 8 second half goals and the forward line was well fed all day by the likes of Leigh Toomey, Andy La Marca and Vice-Captain Lachlan McDonald while Steve Tibb was calm all day and provided penetrating and accurate kicks out of defence.